Every year we feature two superior native plant species.  One of the Prime Plants for Nature is a tree, shrub, or vine and the other is a perennial.  Prime Plants are selected based on these criteria:

Wildlife Value: This shrub produces copious quantities of red berries that are eaten by more than 48 species of birds including robins, bluebirds, waxwings, and 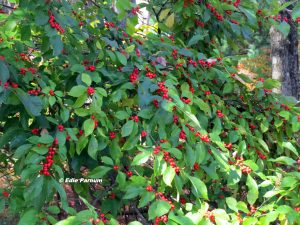 mockingbirds. The berries are not usually consumed until mid to late winter when food is scarce, and birds may be struggling to survive.  The high fat fruits of viburnums, spicebush, dogwoods, and sassafras are eaten earlier in the season.  Winterberry Holly’s small flowers appear in June and attract native pollinators like bumble bees, mining bees, sweat bees, small carpenter bees, and plasterer bees. This shrub is a host plant for the caterpillars of 34 species of butterflies and moths, including the Henry’s Elfin butterfly and Harris’ Three-spot moth.

Growing Conditions:  Winterberry holly is adaptable to a variety of growing conditions, sun or shade, but prefers moist soils. Like other hollies, it is dioecious, so male and female flowers are on separate plants.  Only the females produce berries, but a single male no more than 40’ away will offer enough pollen for three female plants.  Flowering times of male and female plants must overlap for females to bear fruit.

Appearance: This holly is deciduous, so when the shrub drops its leaves, the dazzling red berries show well. The bold red contrasts especially well when snow is on the ground.  Many use the fruit-laden branches for holiday decorations. Without fruits, distinguishing male plants from females is difficult, but some nurseries will mark the plants. This shrub can grow as tall as 7-15‘, but dwarf cultivars are available.  Beware of cultivars that produce large fruits, which are typically not preferred by birds. Deer usually do not eat this plant.

Wildlife Value: Golden ragwort is a source of nectar and pollen for a variety of pollinators in spring.  Twenty species of butterflies, including skippers, use the blooms of this perennial.

Sweat bees, cuckoo bees, carpenter bees, and various halictid bees are attracted, too. In addition, flies like syrphid, tachinid and fireflies pollinate the flowers.  The leaves of this plant host caterpillars of 17 species of butterfly and moths.

Growing Conditions:   Golden ragwort will grow abundantly in a wide variety of conditions, part sun or full shade, in relatively moist soil.  It spreads by rhizomes or self-seeds to form a colony that creates a nice groundcover.  However, when overabundant, it can easily be weeded. This perennial is not browsed by deer and is disease-free.

Appearance:  The yellow daisy-like flowers are small but profuse and showy In April and May. They grow on two-foot stems above basal leaves that are dark green, shiny, and heart shaped. Because golden ragworts grow close together and crowd out other plants, they form an effective groundcover that can stay attractive and green throughout the winter.