I watch my Ruby-throated Hummingbirds obsessively.  Beginning in early May flashes of iridescent green zip around my yard.  These tiny sprites hover, fly straight up, down, and even backwards. When the light is just so, I can glimpse the male’s dazzling red gorget.  I’ve seen that red innumerable times, but I’m always mesmerized. 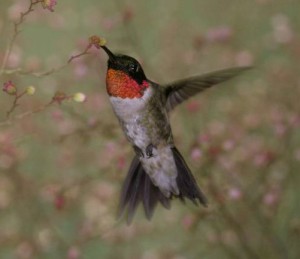 When I hear a zippety-tzit sound, I know that my territorial male is chasing another hummer away from the flowers or feeders. My male often watches for competitors from his favorite perch, usually a small, but conspicuous, horizontal branch.  Like other hummers, he uses a perch to watch for tiny flying insects (an important source of protein), then snags them in mid-air.  On occasion I’ve seen the resident male dive up and down in a pendulum swing for the benefit of a female.

I refer to them as “my” hummingbirds, but they’re not mine at all.  True, they feed at my feeders, which I assiduously clean and fill with fresh sugar water every few days.   They visit the flowers I’ve planted for them–Trumpet Honeysuckle, Trumpet Vine, Bee Balm, Cardinal Flower, Great Blue Lobelia, and Wild Columbine.  Ruby-throats are not particularly shy, sometimes feeding or hovering just a few feet from me.  Once, a hummer tried to get nectar from a pink flower on my shirt.  Another time when one fed just a few feet in front of me, I could see its hyper-fast heart beats (1200 beats per minute while feeding). Nevertheless, most of their lives are unknown to me. 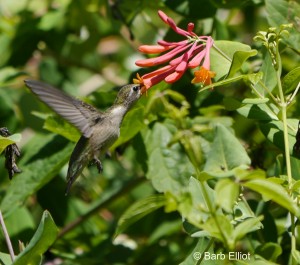 Even though I watch intently, I catch only brief glimpses.  Often one will zip behind the deck railing or some leaves, where my view is obscured. Or it simply vanishes.  I try to count the number in my yard.  I can usually spot two or three, but know that there are probably more during midsummer.  I’ve never seen a pair mate.  I’ve never seen a female build a nest, incubate eggs, or feed nestlings in my yard.  After all, they are wild creatures and don’t live their lives for my amusement.  They elude me.

Soon my resident hummingbirds will be gone. Because the adult males take no part in raising the young, they start migrating in the latter part of July.  The local females and young soon follow. During August and September the hummingbirds I see in my yard come from the north.  I persist in thinking of these migrants as mine, too, since hummingbirds evidently use the same stop-over feeding areas year after year. 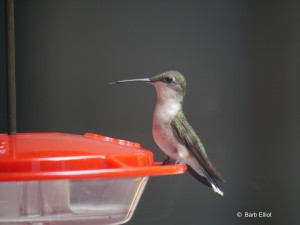 Usually I don’t see any hummers in my yard after the third week in September.  By then, I no longer have illusions of ownership. I won’t see them on their non-stop 600-mile trip across the Gulf of Mexico.  And only if I take an unexpected trip to southern Mexico or Central America will I see them during the winter months.  More likely I’ll be deprived of hummingbirds for seven months.  However, I’ll welcome my hummingbirds back to my yard next spring—indeed, some will be the same birds.

For information about how to attract hummingbirds to your yard and more fascinating facts about them, click here.