Moths, really? Yes, we’ll celebrate moths this coming week, July 19 – 27. During National Moth Week public and private moth-watching events will occur. Mothing, the practice of attracting, viewing, and photographing moths is growing immensely in popularity. But some are puzzled and ask, “What good are moths?” Butterflies are great, but moths are nasty.  After all, moth caterpillars eat tomato plants, make holes in wool clothes, eat flour and cereal in our kitchens, and can be agricultural pests. This is all true, but harmful moths are but a small fraction of moth species. Most are actually very important and beneficial to the environment. 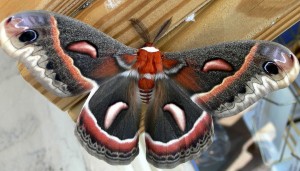 In fact, moths are closely related to our much-loved butterflies. Both are in the scientific order Lepidoptera, meaning “scaly wings”. All butterflies and moths have four wings covered with colored scales. Both groups go through four life stages: egg, larva (caterpillar), pupa (chrysalis/cocoon), and adult (butterfly/moth). Adult butterflies and moths also have a proboscis – a thin, straw-like tube for sipping nectar. However, all butterflies fly during the day, but most moths fly at night.  The tips of butterfly antennae are club-like, while moth antennae are 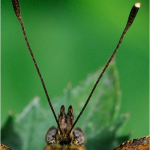 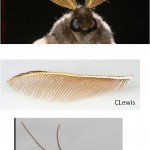 more varied in structure. . Some moths have hairy-looking elongated scales on their bodies. These may provide greater protection from the environment and help them maintain their temperature – useful on cool nights.

But what good are moths?  Widespread and numerous (nearly 13,000 species in the U.S. vs. just 1,000 butterfly species) they play key roles in ecosystems. As pollinators of night-blooming plants, they are very important.  Unlike bees, moths do not eat or gather pollen.  However, their hairy bodies collect and spread pollen as they move from plant to plant. 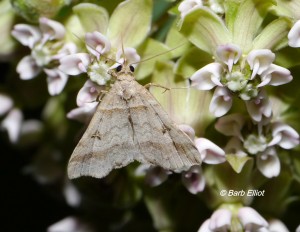 Many plants depend on this nocturnal pollination to maximize seed production.  A few cannot reproduce at all without moth pollination.  The proboscis of some moths can be many inches long, enabling the moth to reach nectar at the end of elongated flower tubes that are too long for bees.

Moths, both adults and caterpillars, are key food sources for many animals. Other insects, spiders, birds, bats, frogs, toads, lizards, rodents, foxes, and even bears consume moths. As indicators of biodiversity and the health of our environment, they function as “canaries in the coalmine.” Almost all moth caterpillars require specific plants as food.  Less diversity in native plants means less food for moth caterpillars and therefore, fewer species and numbers of moths. The result — less food to power the web of life. 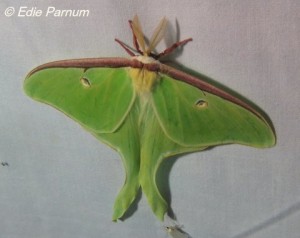 Many moths are beautiful, like the lovely Luna Moth.  Less impressive moths are often  masters of mimicry or camouflage.  Some mimic scary-looking animals such as snakes. Others, such as the Io Moth, have huge “eyes” to startle predators.  Some look like bark, dead leaves, lichens, or even bird droppings– making it almost impossible to spot them. 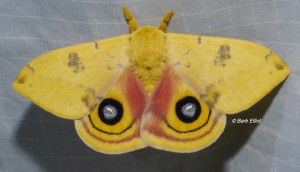 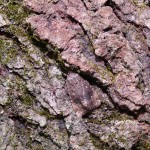 I find moths to be downright interesting creatures.  For instance, the beautiful and large adults of the Giant Silk Moth family have captivating life histories. These moths, such as the Luna, Tulip-tree, Cecropia, or Polyphemus, live for only a week or two — just long enough to attract or search out mates and for females to lay eggs.  With reduced mouthparts, these moths are unable to eat.  Females emit chemical scents called pheromones to attract males.  Males in this family have large, feathery antennae to detect pheromones from as far as seven miles away. They want to make a beeline to the female!

Moths come in a variety of shapes and sizes.  Some are as tiny as the tip of a pencil.  The Cecropia Moth (shown above), our largest moth, has a 6” wingspan.  Some rest with their wings flat. Many hold them vertically like some butterflies. Others fold them like tents over their bodies. 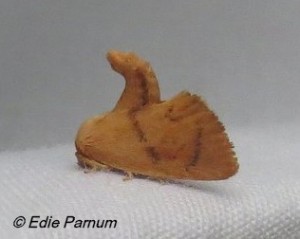 Yellow-collared Slug Moth with its abdomen curled up. © Edie Parnum. Click to enlarge.

A few curl their abdomens up above their wings, an odd posture that is likely part of their mimicry or camouflage.  Sphinx or Hawk moths display outstanding flight dynamics. They can fly very quickly, hover, and move rapidly from side-to-side.  In fact, the flight aerodynamics of some Micro-aerial Vehicles’ (MAVs) are being designed by the military to emulate Sphinx moth flight.

Both Edie, my Backyards for Nature colleague, and I now consider ourselves to be “moth-ers”.  We frequently have “moth nights” in our yards. We attract the moths by shining special lights onto a white sheet, a place where they can land. By painting fermented bait onto tree trunk, we can attract moths that don’t come to lights. We follow Moths of the Eastern United States on Facebook and note what moths are being seen by other enthusiasts.  In June, Edie and I attended Mothapalooza, a weekend moth conference in Ohio.  With 150 participants, it sold out within two weeks of being announced – a testament to the burgeoning popularity of mothing. We visited five mothing stations that hosted thousands of moths.  We were up until the wee hours, but had great fun.

Try mothing yourself.  At first keep it simple. Leave your porch light on for the evening. Go out periodically to see what moths have flown in.  With a flashlight, look for moths nectaring on your flowers.  Fragrant, white, and pink flowers are particularly alluring.  Look closely, 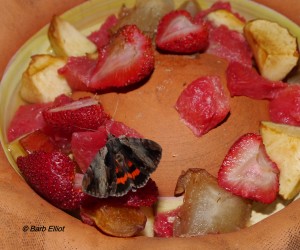 and you’ll see each moth using its proboscis to suck up nectar.  Or, put out a plate of rotting fruit and check for moths that stop by for a sugary drink.

Invite family and friends for a moth night in your yard.  See Edie’s Moth Night  blog post from last year for moth night ideas, a bait recipe, and host plants for moth caterpillars.  Check the National Moth Week website for public events in your area and tips on finding moths.  All across the United States and in many countries of the world, moth-ers will be celebrating moths.

Moths are good!  They play key roles in the web of life.  Plus, they are fascinating creatures.  These gems are outside your door at night.  Try mothing, but I warn you that it can become addictive.  Like a treasure hunt, you never know what may fly in.  Become a moth-er and … welcome to the dark side!

Himmelman, John.  Discovering Moths:  Nighttime Jewels in Your Own Backyard.  Down East Books, 2002.